Although I did not go to college until my later twenties, I never left my desire to study behind while exploring Alaska through other endeavors which included an extended tour of duty on a fishing boat. After my deck and galley chores were done, for five years I pulled out my microscope, textbooks and sketch pad to describe, render and identify the various creatures we plumbed from the icy depths of Prince William Sound to the North Pacific waters surrounding Kodiak Island. 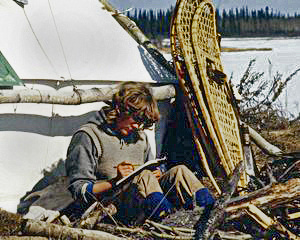 Admittedly I got carried away with my adventuring, venturing into the Alaskan wilderness or "Bush" to hunt, trap, goldmine, build log cabins, climb mountains, blaze trails and just plain survive on the most elemental level. One of the severest episodes I can recall was hiking around the south end of Kodiak Island in blustery winter winds and along ice-encrusted rock cliffs in search of otter and fox, while hoping to avoid marauding brown bears with only a 22-rifle to protect me! The scrapes and gauges on my gun stock bear testament to my city-bred clumsiness. I do keenly remember that warmth, light and food transformed the simplest of shelters in the wilderness - be it a canvas wall tent, suspended tarp or "wicki-up" - into the finest of homes. I no longer trap because I no longer live on a subsistence level. Also, I have too high a regard and love for the wild ones - ironically acquired through an active predator-prey relationship plus study of zoology, rather than as a more passive observer

I also learned the difference between a vole and a black bear one memorable spring night on the Yukon Flats in the land of the midnight sun. Persistent, soft, shuffling sounds that I sleepily misattributed to a foraging vole, later startled me awake with a blast of air from the canvas door flapping in the wake of a bear circling the tent! The mistake was immediately confirmed upon discovery of an entire brick of Tillamook cheese stolen from our meager rations outside the walltent. No vole would have done that! 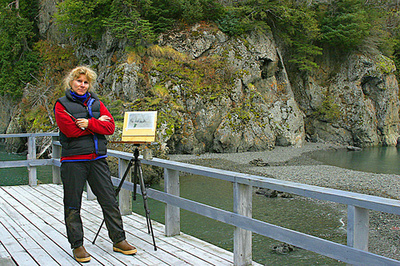 After a stint of gold mining and log cabin building in the Alaskan Interior, I left my wilderness survival existence and embarked on more schooling. After studying zoology and art in Anchorage, my art professors packed me off to New York, where I proceeded to learn as much from the dead masters as the live ones. The old masters 'spoke' to me loudly and clearly through their timeless masterpieces in the NY Metropolitan, as well as major art museums in Europe, providing a distilled inspiration to the raw inspiration that I brought with me in a duffle bag as an eager art student. These days I spend more time in the studio and less on adventure, but look forward to a few painting/photo research trips a year. Ostensibly, I paint more than geography, but do like to get a sense of place before I paint it. So I have been venturing south from Alaska into the Canadian and US Rockies to familiarize myself with the lay of the land, mountain lake and waterfall, etc..

If I have learned anything at all from getting my BFA in New York and from intently studying the works of the old and modem masters in America and Europe, it is that style, even subject matter, do not create a masterpiece. It is a painting's presence, power, mystery and perhaps a touch of the sublime, which command a viewer's attention. 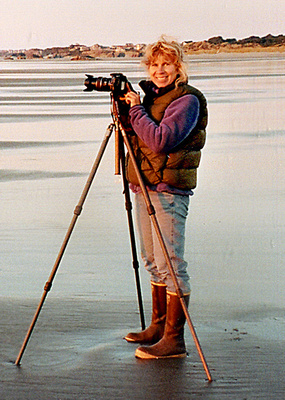 Two of my most significant New York teachers took me under their wing and drummed this into me. One, a Photorealist, has work in the collections of the NY Metropolitan, Hirschorn Museums and the Carnegie Institute; the other is a Minimalist and has had at least one Guggenheim Retrospective. So I listened to them.

Various other master/mentor influences inspire me. These include 17th century Dutch landscape painter Jacob Van Ruisdael, 19th century English Romantic painters John Constable and J.M.W. Turner, 19th century schools of Naturalism and French Barbizon, plus Impressionists Claude Monet, and Wolf Kahn, for their light-filled color and brushwork. John Singer Sargeant and Joaquin Soralla transcend categories to stand in a world all their own. Albert Bierstadt of the Hudson School must be included for sheer mountain drama, Sanford Gifford and John Kensett for luminous tranquility, Charles W. Eaten and Hugh B. Jones of the Tonalist movement for earthy, yet ethereal, landscapes.

During the last few years I have discovered painting and sketching en plein air, and so have assiduously followed the examples of Richard Schmid. This more immediate alla prima style of painting - with bugs, high winds, and all else that weather can throw at one when painting outside - has been the single greatest catalyst to pry me away from Photorealism toward a more painterly and expressive realism, ala 19th/29th century Hudson River Landscape painters and the American Tonalists.